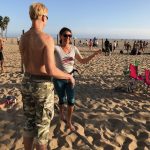 Relax. Breathe. Focus. These were the words my friend whispered over and over as I precariously made my way across the slack line for the first time.

He whispered them again the second time, as I gripped his hand a little less tightly.  And again, the third time as I risked letting him go for a split second, once, twice before lunging for the pole at the end of the line.

I jokingly said it sounded like a metaphor for life.  He nodded his head sagely, agreeing.

It has been a hard few weeks.  Spring used to be our favorite season with its slew of celebrations: my birthday, his birthday, our anniversary, Mother’s Day, Father’s Day.  Now, I will have to ride out each of these days with his loss reverberating in my heart like an anvil striking, over and over again.

The other day I went searching through the pockets of his jacket, hoping to find some remembrance of him, some little sign that he was still around, that this was just a bad dream. I found an old piece of tissue paper and a couple of metal rods.  That’s all there was.

It didn’t occur to me before, but it seems the colors of the grief keep changing, the nuances to the loss, the heartache, keep shifting.

These days, the color of grief is loneliness.  In the beginning, I had welcomed being alone.  I needed the privacy and space to let it rumble through me without having to put on a happy face and pretend like things were ok.

But over these past weeks, as I sobbed in the shower and wept by the sea, what showed up was how alone in all of it I felt.  My mind went to town on the fears.  What would happen if I got sick?  Who would be there for me when I got old?  Who would love me no matter what?  I went through my little ‘black book’ of family and friends and ruled them all out, one by one.  Each one had their own lives to live, their own burdens to carry.  I didn’t want to bother them again, with how, after nearly a year, it still hurt so much.

So I sat with alone and loneliness and sorrow.

Then something odd happened. The little girl who used to sit on the bench at recess because she was too shy to ask, took a deep breath, stood up, and boldly said,

“I want to play.  I want to be with people.  I don’t want to sit here alone anymore and just watch.”

Really?  It was such a strong impulse I couldn’t refuse.  So, on a beautiful warm afternoon, I made my way down to the beach where friends gathered to work out on the rings, the green, with hula hoops and slack lines. It was intimidating, all these strong athletic bodies moving so gracefully and powerfully.  That was not me by long shot.  Instead, the bench by the fountain was looking mighty good. I almost changed my mind.  Almost.

But my little girl wanted to play.  Needed to play.  It had been such a long time.  I took a deep breath, let go of embarrassment and asked, “Can you show me?  Will you teach me?”

Wheeeee!  Wheeeee! Wheeeee!  Jumping up and down with fun and laughter.

How to express the incredible joy of that afternoon?  That moment when we feel like we belong, that we are no longer sitting on the sidelines looking in.  Instead, we are simply having the experience, with no judgement, no fear. Even if we are afraid we will fall or look clumsy, none of that matters, it’s just play.

My body hummed with pleasure.  She delighted in the sense of accomplishment and satisfaction as she tried out new skills. True, she shook and fell and missed. But she also succeeded!  She walked the line, made the punch, hulaed the hoop.  It was delicious to feel the ache in her quads, the tightness in her muscles, at these new-found activities.

I’d forgotten my six-year-old fearlessly walked the railing at the playground, tied a sheet to the stairwell and swung down the steps, piled pillows at the base of the refrigerator and dropped off the side, all for the thrill of it.  She was still here, alive and well.

I walked home that evening in the cooling air, a proud bounce in my step, re-living the sensations of the afternoon.

As I near the one-year anniversary of my husband’s passing (Somehow? Already?) I know there are dark days ahead.  I am not done with tears and longing and loneliness and heartache.  The waves will no doubt raise me up and drag me under again.

But in all of that, I also know there is pleasuring to be found, joy to be discovered.  Sometimes, our six-year-old knows best.  That we (just) have to take a breath, reach out, and ask…