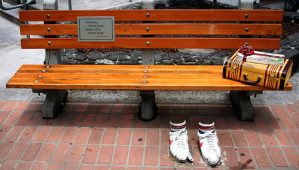 Over and over I’ve expressed my great thanks to family and friends, old and new, for their amazing outpouring of love and support.  Though not religious in any formal tradition, I’ve come to call them my angels and feel blessed to be surrounded by so many.  But the story I’m about to share taught me that angels are everywhere, in all walks of life, all shapes and sizes, sometimes when we least expect it.

It was a week after Mike had passed away and I was down in Santa Monica making my slow trudge to the pier.  I literally watched my feet as I took one step and then another.  In the early days I couldn’t get further than a block or two.  This morning there was an odd satisfaction that I had come as far as I had. As I neared the pier I noticed a homeless man in a bright poncho sitting on a bench, dozing.  He had a sign there next to him:

I walked past him and then stopped, turning around to look.  Maybe it was the words ‘rescue me,’ that called, but I turned around and went back to sit next to him on the bench.

“Hello.”  I whispered as I watched him shake himself awake.  “I don’t have any money.” Pause. “Would you like a hug?”

He was alert now, looking at me, I’m imagining rather surprised at this nutty lady sitting down and offering him a hug.  He was an older gentleman, dark skin, with graying hair, and one eye that looked in a slightly different direction.  Next to him were a couple of plastic bags filled with clothes and that sign.  He looked around before nodding yes, and I reached over and awkwardly gave him a hug.

Then he asked the question, “How are you today?” Boom, couldn’t pretend otherwise.

My lips quivered and the tears started flowing as I mentioned how my husband had just passed away.  And then there he was, taking my hand, whispering his words of consolation, telling me that Mike was in a better place now, that God had called him home.  I cried even harder.

Together we rocked back and forth on that bench.  At one point he asked me to please stop crying, he was worried the police would come by and think he was hurting me….

Eventually the tears stopped and we sat together on that bench, my small hand in his larger calloused one.  I told him a little bit about Mike and our marriage, our adventures and travels.

His name was Merle, and he delighted in the fact that all three of our names began with an M. He told me about his brothers and how they’d all been born on holidays: 4th of July, Christmas Day, New Year’s Eve.   He shared how someone had stolen his bike, his pack, his id – it was a tough place out there.

And then he told me that Mike was right there, watching out for me; the tears welled again. But I did laugh for a moment as he joked that Mike might not taking it kindly that he was hugging me so much, this stranger on a bench.

I could feel the shift in the connection as the time came to say goodbye, easing my hand out of his strong warm ones.

At any other time I could not have imagined myself acting this way, old prejudices and fears so strongly ingrained.  But on this day, during this time of need, that wall came down, those fears merely an illusion.  There is indeed so much goodness in the world. In that time together, we were not strangers, he homeless, me a recent widow, we were two souls in need of comforting who found each other on a park bench.

His beautiful eyes sparkled as he took my hands one last time. “Blessings,” he said before he kissed them and let me go.