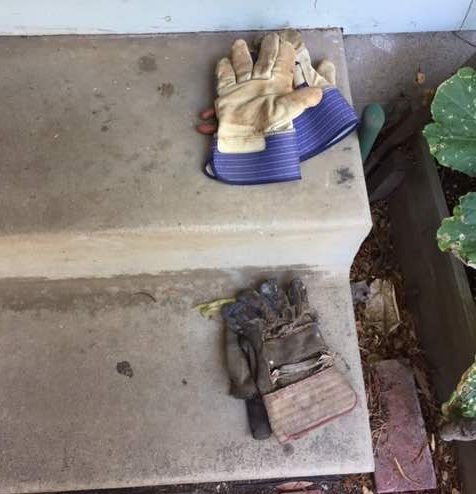 This piece has been a while coming as I’ve looked about our home deciding what on earth to do with all of Mike’s things.

“There is no rush, take your time.  Things have energy and you will know when it is time.”  This was the wisdom of Ziri Rideaux, the fabulous woman from Friends Funeral Home, who helped guide me through the process.

As we sat there, Elise and I, trying to absorb this new reality, she reminded me that everything was energy, and that over time energy changes. There was no need to rush to do anything. When the time was right decisions would become clear.

I have taken that to heart, trusting the impulses as they’ve risen up, noting my reactions to things, both his and mine.

In some cases it was an almost violent “throw it away – NOW!” We had a comforter, losing feathers, ink stains, and for whatever reason he would not get rid of it. Morning after morning after he died I made up that bed, hating that damn comforter! Could not rest until one afternoon I dragged my mom off to Macy’s and found a beautiful quilt to replace it.  Something eased inside when I spread out that quilt, white with blue flowers, over soft purple sheets for the first time.

Then there were these crazy things, items I knew I would throw away, but just couldn’t touch yet.  Before he went into the hospital Mike had been building me a trellis. He’d put everything away except for two pairs of gloves on the kitchen stairs.  One pair was in fine condition but the other was this ratty old pair, literally ripped and falling apart.  For weeks I’d left those gloves on the stoop, as though at any moment he would come back to pick them up and get back to work.  I told Elise not to touch them.  Carefully I’d sit on the steps next to them so as not to disturb them.  Sometimes both of us would squeeze onto the steps, drinking our morning coffee, and still I would not budge them one inch.

Yesterday we began cleaning up the garage and I walked past those gloves, something had changed.   For the last time I looked at them on the steps before I picked up and threw them away.

And then of course there are the landmines, untouchable, unthinkable.  His closet is in my office, the door remains closed.  A laundry basket of his clothes thrown in, the door slammed shut before I can look inside.  In July we are converting the office into a bedroom and at that time I will have to determine what to do with his clothes.  But for the moment I have been given a reprieve.

How much harder it must be when we are forced to immediately ‘empty out a space,’ after a loss.  It must be like amputating a leg or arm, as we are pushed to decide what to keep, discard or donate without the time to take it in.

So I am grateful that I have this option to adjust slowly, to let my insides shift to accommodate the energy of his things, and the evolution of that energy.

I look around our home now with new eyes, noticing I am ready to put away the sympathy cards, buy new rugs for the bathroom.  Slowly and in good time, I am looking at all our things, resolving to keep only what is beautiful, what pleases me.  It is a lesson in listening, in trust, in self-discovery.