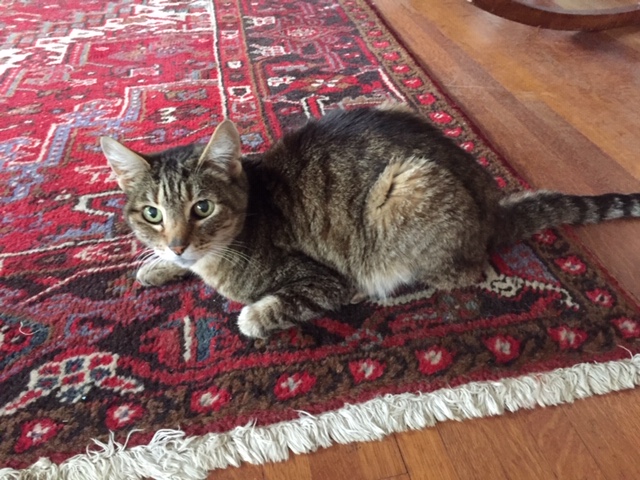 On Sunday morning I let my cat out the front door.  Later that afternoon, I heard him yowling in the backyard to come in.  I opened the door and was surprised to see he was limping, unable to put his front paw on the ground.

All plans for Monday were dropped as I made an appointment with the vet. In this new pandemic setting, I needed to wait in the car, and since I was a walk-in there was no set appointment.  But I was grateful to avoid the emergency room and so we sat. For an hour and a half we sat, with him wailing in the seat behind me, and then, a dreadful smell, oh shit, he’d soiled in the carrier.

Add to that, it was a rainy morning, so I was alternating turning on the engine to stay warm, and opening the windows to let in some fresh air.  An hour into the wait, I desperately had to pee.  They wouldn’t let me do it at the vet’s and even Mcdonald’s was closed to indoor dining.  I was literally considering driving around the alleys searching for a place I could squat down in a corner.

At last, they brought him in, and the relief was palatable.  At last, they’d be able to take care of him and I could get back to my day.

And then the phone call.  It was one of those conversations where you think you’re ready for the bad news, for me it was how much money this visit would cost.  But then all of a sudden, it’s worse than you expected, and you can’t quite comprehend how it got so bad so fast.

An x-ray revealed it was his humerus bone. I’ll leave you to laugh.  Double laugh, it was the same bone my mother broke when she started her descent to the end.

But it’s not just broken. The bone itself is weak, disintegrating, so a cast won’t fix it.  I’m now looking at having his leg removed.  Even as that option sinks in, there’s one more thing.  He also has a white blood cell count that is off the charts.  They only see that when there’s some raging infection or cancer. He could have bone cancer.  All of a sudden, I’m looking at putting my cat to sleep.

How did I get here, again?

His name is Bobcat.  We got him when my daughter started high school.  That’s how I remember how old he is.  He is the sweetest of cats; we used to joke he was more like a dog than a cat.

He loved my husband Mike.  He would follow Mike down the street when he went out to get his morning coffee.  They would pad along down the block like pals until Mike hit the alley.  For some reason Bobcat wouldn’t go any further, like it was a river he would not cross.  Instead, he would meowl in great agony as Mike went on without him, and then curl up on the nearby planter to wait.

Sure enough, as soon as he sensed Mike heading back, he’d jump up, meow in loud greeting, and race Mike back to the house, safe and sound.

That cat has been with us for years.  First, he was Elise’s cat, then Mike’s, and now he is mine.  I think of all the times he has comforted me, in his sweet cat way.  The number of times I curled up on the couch after Mike’s death, burrowed under the blankets, and he would find his way into that warm curve by my ribs.  In the depths of the grief, his gentle purr against my heart, his cool nose along my cheek, the way he would rub himself into my palm, all gave me a bit of comfort.

I also think of the times I was less than kind with him.  The times he would call out for attention, making me crazy, and I’d put him outside. The times I would push him off my lap when he wanted to curl up there.  Every now and then, a wild contemplation to take him up to the mountains and leave him there, desperate to be left in peace with my sorrow.

It is not lost on me, how I’ve done that with others I love.  Taken them for granted, assumed they would always be there.  Available when I needed them, and willing to be ignored when I was not.

We’ve started antibiotics and pain medication in preparation for possible surgery.  He curls up in the closet or on top of the heater or in patches of sunlight to stay warm.  He doesn’t purr as often when I pet him.  He eats a little, drinks a little, and this morning he was more vocal about going out.  I take that to be a hopeful sign.

I am counting down the days until next Monday, when they will do another blood test and see where his levels are.

I cannot go back and do over the past.  But over these next 7 days, I can take him into my lap with love, giving him the comfort of my care.  I can give him food and water with the intention of offering him nutrition and support for his little body to heal.  I can stop on my way to my desk, to the couch, and stroke his head and tell him it will all be ok.  I can, over these next few days, let him know how much I love him and appreciate his sweet soul.

It is the great reminder, yet again.  At some point we lose the ones we love.  Our time together is finite.  It is important to ‘be’ with them when we are with them. To let them know by word and by deed, that they are loved, appreciated. To make the time and space for souls to dance together, at least in this realm.

I can’t go back and change things, but I can strive to go forward and remember.