Last week I had four beautiful actresses sitting in my living room, reading excerpts from a performance piece I am developing, ‘Skins I have Worn.’  Six months ago I could not have imagined that as a reality. 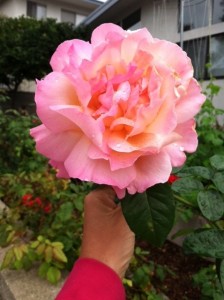 Anais Nin once wrote, “And the day came when the risk to remain tight in a bud was more painful than the risk it took to blossom.”

I love this quote, because it so perfectly expresses the stages we grow thru as we evolve.  These days I am slowly and sometimes, painfully, letting my petals unfurl.  And in the process, I am noticing old patterns raising up their heads in alarm at the shifts that are coming.  Old behaviors and self sabotage flexing their muscles.  And the greater the expansion, the more clever they become.  But the difference these days is that I have a greater awareness of what I am doing.  And trust me, awareness is a huge key.  To even recognize that when I sit in front of the tv for hours, or munch down on a package of cookies there is something serious cooking below.  Though sometimes I given in, I do it with recognition and compassion that I am expanding and figuring out my way thru it.  Sometimes giving in a little bit allows me to the stretch further.

The hardest part in the process is sitting in the unknowing;  in the ‘not knowing how it will all turn out.’     There is a sense that much of it sits around the corner, somewhere in the mists, waiting to be revealed.  And it is only in taking the next step, any next step towards what calls me, that something will become clearer.

It started late last year, though I suspect the impulse actually started much earlier than that.  The voice in me, the bud in me, that said ‘it is time!’  I had been dancing around the need to take my writings and put them up on stage for several years.   And after years of wanting, and writing, and wanting, it was finally time to just take a step.  There were so many questions, and of course there was all of the fear.  How would it look? Who would join me? Could I do it? Would anyone come to see it?  How would I raise the funding? And on and on.

So I started with what I did know.  I did know the women I was channeling needed to be heard. They were women who were lost, afraid, long oppressed and abused.  Who’s voices had been smothered and choked, who had lost their center, and their sense of belonging .  And they were searching for their way thru the shadowlands.  I knew that I wrote because it gave me the opportunity to explore my own shadows, to exorcise my demons.  I saw this writing was as much about my healing as it was anything else.

I also knew, without a doubt, that this piece had to incorporate dance and movement.  Even though I had never trained professionally, I loved to dance.  I knew when I gave into it, it set me free.  And I knew that our body spoke the truth even when our words often did not.   It was clear that my characters could express themselves, their true selves with their bodies, with their movements, in ways that they might not feel safe to do so with their words.

That was what I wanted to put up on stage.

So I started asking for guidance.  And people showed up in my life, and ideas flowed when I walked on the beach, and I found myself following a yellow brick road of my own creation.

So, this morning when I woke up, thinking about all the junk I ate yesterday and all the negative thoughts and fears that were rippling thru my body I thought, “Ok.  That’s it – time to take the next steps.   You already know what some of those are.”

And I see the old me is shaking in her boots, putting up a mighty fight, trying so hard to distract me and lure me back into fear and apathy.

But the difference is, this time around, I recognize what is happening and I feel the compassion for the young girl that only wanted to fit in.  The teenager who only wanted to belong.  The young woman who only wanted to be loved.  And at 50, finally recognizing that I am the only one who can truly ease that longing.   And if not now, when?  Should I die tomorrow, this is the dream I would most regret not having followed.

So I say to me, and I say to you:  It is time to step out. To turn your leaves to the sun.  To unfurl your glorious petals in all the colors of the rainbow, and to bloom.  It is time.