I woke up the other day with a big old knot in my stomach.  This wasn’t really a surprise as I had been expanding at a tremendous rate for the past few weeks, and was bound to hit some upper limit stuff.

Unfortunately, on days like that it just seems to get worse and worse.  My writing felt uninspired; two clients complained about problems they were having with their contractors; and I had just wasted an hour on a computer program feeling like a 5-year old in algebra class.

I knew I was hitting overwhelm in a big way, and underneath it all that was that chatter: “What were you thinking? How will you pay for all of this? You’ve bitten off way more than you can chew.”

At about 2, I’d had enough.  It was time to take a break and head over to my mom’s house to check in with her.  The whole time I was driving there, I could feel my muscles tightening, and that mind chatter going to town. 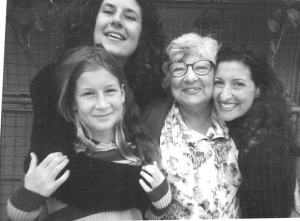 So I got to my mom’s house and we sat down for a cup of coffee.  She is a little firecracker – literally at 4’11.  Eighty-four years old, spry, generous, with a laugh that makes strangers smile.  And though her memory is slipping a bit, she can be a bolt out of the blue with her statements.

As always, she asked how things were going, and how my day had been.  So I started my tirade, about how everything felt so hard, so frustrating, so overwhelming.  And she listened for a few minutes before asking me, “but is it life or death?”

‘Huh?’ I thought.  This is my business.  I have important work to do.  I need to make a difference in the world.

Coming from her, this was a serious question.  For you see, my family is Jewish, and when my mother was a youngster living in Paris, she and her family had to leave everything behind when the Nazis rumbled into France.  By some miracle (that is another story) they were able to slip out of the city and go into hiding with some relatives in the north of France.

She never finished school, and though she didn’t talk about it much, I knew she remembered only too well the hiding, the fear, the lack of food, the true terror of being discovered.   The time they were unable to admit a cousin had died so that they could hold onto the ration card.  And all the things she didn’t tell us. True, it was long ago, but still…

I looked at my mother then, with her big green eyes, her gnarled fingers, her ever present smile and her great big heart.  And it made me ponder the answer to, “Was it a matter a life or death?”

So, too with this new business, I would figure things out.  One step at a time.  And it would take what it took to get there.  There was no need to get freaked out about computer programs, and all the branding that had to be figured out, and the learning/growing curve of starting a new business in the 21st century.

But I also reminded myself that the end of the day, the work I was doing was important, vitally important.  If I stayed true to my vision, to my ultimate purpose, then when asked the question ‘Is it really life or death?’ I would have to answer ‘Yes.’