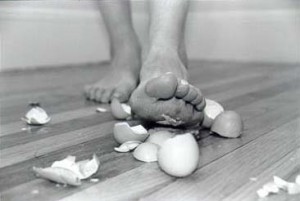 I am tired of the eggshell dance.  You know what I mean:

Tired of worrying about what people think or of hurting their feelings. Tired of being afraid to make a mistake.  Tired of talking quietly, cautiously.  Tired of making waves. Tired of tiptoeing thru life. Tired of holding it in, sucking it up.  Tired of keeping it back.

Tired of smiling until my cheeks crack.

Tired of not trusting myself.

Tired of not believing I am loved.

For my whole life I have lived in the shadow of the giant eggshell.  Like most, it probably began with my family and listening to the endless arguments between my mother and father.  They were loud ugly fights where my father accused her of being a ball buster:   Because she dared disagree with him. Because she did not like some of his choices.   Because she would not let him be the man of the house, or so he said.

To my father, She was the reason for all of his failings….

At the age of 12, I dared to sneak off to a party that I had been forbidden to attend.  When they found out, the punishment for this minor crime was not your typical grounding or revoking of privilege, but rather 3 days of being ignored, not spoken to, rendered invisible.  On the second night I reached out to ask for forgiveness and he literally turned his back on me and walked away.

Is that not one of our greatest fears? To be ostracized, found unworthy and cast out from the tribe?

So from that day on, I rarely strayed.  I found the straight and narrow and hugged it tight. I rarely talked back, did all I could to please, became the supreme diplomat.  That is how I lived then and for years since.

But how long can we keep up the charade until something starts to slip.  Until someone notices the desperateness in our eyes?  Until we begin to act out, act in? Until we sabotage ourselves with too much food, to much drink, too much t.v? Until one day we stand at the edge of the precipice, the smile finally gone from our faces, and seriously consider jumping off.

For many years, my only freedom, my only escape came thru my creativity:  my writing, my performing.  At least there on stage or on paper I could finally release all that was me – all my shadows, my sorrow, my ugliness, my sins.  And in this world I could also experience supreme love, joy, glory. In the world of my creativity I could finally be myself  – the full spectrum of the human experience.

But this winter solstice something shifted.  After attending a sacred ceremony I finally came face to face with this realization – that I was no longer a child.  That I had projected my father’s fears into every relationship I had ever had.  That for too many damn years I had buried, hidden, smothered all that I was, except for during my creative expression.  That I had lived the vast majority of my life as a sliver of the glorious being that I was. 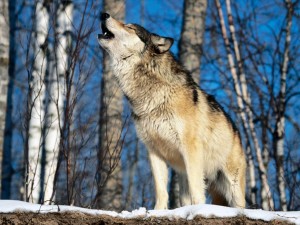 This is the year the mask comes off, the eggshells smash, the arms reach out – wide open! Because ultimately, this is all we can do – live our life, be ourselves.