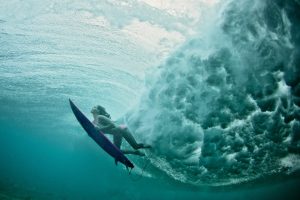 Several friends have likened the process of grieving to surfing.  I understand the analogy.  At times the waters are relatively calm and we can ride along.  At other times, we are buffeted by tsunamis that threaten to drag us under.  Yesterday, I discovered a third way – diving into the wave.

For as long as I can remember, I’ve had issues around scarcity.  I can attribute it to a father raised during the depression and a mother who lost everything when she had to flee the Nazis.  Growing up, I would ping pong between my father’s ‘sky is the limit’ and my mother’s frugalness.

Over the years, through my own work and with my husband’s support, I came to trust that all would be well, that I would never end up homeless (sound crazy?).  But with Mike’s death that surety came crashing down.  The old fear reared its ugly head and all the mantras in the world and facts to the contrary could not shake the roaring panic I would lose my home.

Yesterday, something in me cried out, “Enough! Look this beast in the face and let’s be done with it.”  As if girding for battle, I made a fresh pot of coffee, turned off the phone, and sat down with pen and paper to take it on.

Over the course of the next hour, I let my imagination meticulously roll out what it would be like see this fear come true.  Word after word, I traced what it would be like to have no money left to pay the bills, initially turning off the expendables – newspaper, gardener, television.  I described the feeling in my body: the clenching of my belly, the tightening of my chest, the pounding of my heart as I saw the numbers in my checking account shrink each month.

At times, my rational mind objected, telling me this would never happen, there were too many facts that contradicted it, but I was so tired of this story. So every time the objection came up I would slam down, ‘set the bitch free,’ and write on – one painful image at a time.

Denial as I used credit card after credit card to pay off the essentials, until one by one, they came back ‘credit denied.’  The sound of the mail coming through the slot and picking up the bills with their bold print, DUE NOW, OPEN IMMEDIATELY, carrying them directly to the trash like rats by the tail.

Sobbing, a part of me begged to end this.  Was I absolutely insane to torture myself this way?  But I knew that as long as this fear lurked in the background, a painful buzz, I would never be free of it.  So onwards, tissue in hand, onwards.

To the sound of knocking at the door and the credit collector calling out my name.  “Mrs. Strader, Mrs. Strader,” while I hid in the corner so they couldn’t tell I was home.  How small, how shrunken I had become.  I didn’t go out any more, had stopped bathing, could smell myself when I prowled the rooms.  Couldn’t sleep, couldn’t eat.  Tighter and smaller.

Then the day came when it was the Sherriff’s department that arrived, locksmith in tow, to let themselves into my home.  In intimate detail, the sound of their feet moving through the house, my house!  Their voices calling out to me, wondering if perhaps I was dead.  Seeing them with my ears as I crouched behind my bed, panting and whimpering into a pillow, praying that they would go away.

The floor trembled as heavy footsteps finally found me behind my bed.  I had become an animal terrified, trapped in a corner.  (Am I crazy to put myself through this?  Yes.  No. Set the bitch free!)  I heard his voice on the radio letting them know he had found me, and he slowly lowered himself next to me.

I could feel the heat of his body near mine, the low rumbling of a voice calming a wild beast. After a while a hand rubbing my back, easing the chill, all the while whispering, “It’s ok.  We’re not going to hurt you.  It’s ok.”

In the background, I heard heavy footsteps tromping through the house, my house no longer.  I knew this, and in some ways it was a huge relief.  A sob, a deep breath.  His hand was steady as I rose from behind the bed, joints creaking.  Another deep breath.  “It will all be ok.  We’ve got you.  It will all be ok.”

Another breath. Coming back to human.  With each breath I slowly brought myself out of this story, this deep dive into one of my worst fears, one of my ‘unimaginables.’

So was I crazy?  Didn’t I hurt enough without having to imagine even more pain?  But this was an ancient fear that just kept showing up, and on this day my Soul took me by hand and dragged me through the storm.

Feel it then, the fullness of that panic, that contraction, that pain.  Where does it live in our bodies when we visualize the worst that could happen?  Stay with it, stay with it, until at last we catch our breath, lift our eyes.

When all was said and done and the sobbing eased, I acknowledged the end of the story: I was still here, I had survived. No matter what happened, I had myself. I had myself.

I may yet have to learn how to surf, there are so many lessons there.  Diving through the crashing waves instead of trying to avoid or outswim them, we come out the other side, exhausted, but somehow stronger for the ride.