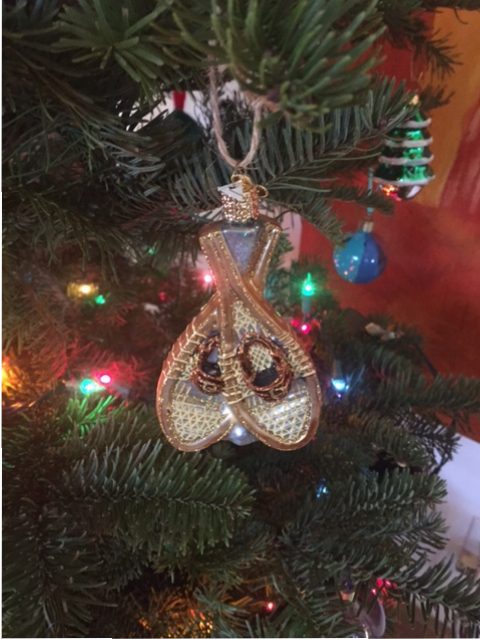 Tradition.  The transmission of customs or beliefs from generation to generation.

Christmas when I was growing up was always fraught with tension, as expectations ran high and indubitably my parents would get into a big fight and all was ruined.  Being married to Mike changed all that, and especially after our daughter was born. 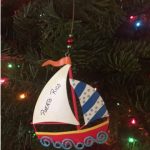 Over the years we created our own traditions.  We would get the tree and decorate it with ornaments we gathered from our travels.  I would tuck chocolates into Elise’s slippers so she’d discover them when she put them on Christmas Day.  We would sit around, warm and cozy, drinking coffee as we handed out gifts from Mr. and Mrs. Clause.  For the grand finale, we had a tradition from Mike’s family.  A string was tied from a card on the tree and Elise would trace it around the house, out to the garage, and back into the house until she uncovered her ‘big’ present.

As we moved into the holiday season this year, I didn’t even know if I could stand getting a tree, though the thought of not having one felt even more depressing.  However, when we were in the Adirondacks we went to a little shop and there were Christmas ornaments for sale.  A glittering pair of snowshoes caught my eye and the decision was made. 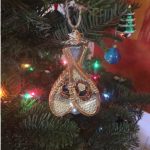 This weekend we went out to get that tree.  It took three stops.  The first place was closed, the second was sold out.  Finally, at Delancey Street we found our tree.  Tucked it into the car and brought it home.  Done.

All day, I felt it weighing on me – this tradition of decorating the tree. We put on some music and brought down the boxes.  Untangling lights, unwrapping ornaments.  We barely spoke at all.  There was no reminiscing of our travels.  No sipping of tea.  We put them up as quickly as possible, like pulling a bandage off of a wound.  We managed to keep it somewhat together until Elise pulled out an ornament she had made in first grade, of her and her dad surrounded by a wreath of playdough.

And then it hit us like an avalanche. He was gone, and there was a gaping hole where his presence should have been.  I couldn’t hear his voice, or feel his arm around me as we stood back to admire our work.  There would never again be our family at Christmas in the same way.  As her lips quivered I grabbed her and hugged her close and we both cried for a bit.

Traditionally, the last ornament to go up was the angel that sat atop the tree.  When Elise was little, Mike would lift her onto his shoulder to do the honors.  We both thought the same thing as she, now standing taller than me, placed that angel up onto the tree.  It was done.

It is the 18th of December.  One week until Christmas.  Ten days until my daughter’s birthday.  13 days until the end of the year.

I am finding my way through this landmine of the holiday season. There is no shortcut through this.  No work around.  It will be day by day, moment by moment.  I won’t be able to sleep through this, though I can certainly understand the appeal of a glass of wine or three.

So what do I hold to as the avalanche rolls in?  There are friends and family who have time and time again opened their arms and hearts. Putting these words on the page brings some relief.  Walks on the beach.  And when there is nothing else, there is surrender; falling to the ground, the bed, the car, and letting that great big ripping sorrow wail through me.

Until it passes.  And we pull ourselves back up, wipe our tears and take another step. 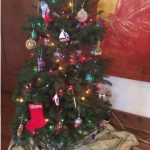 The tree is rather lovely.  We put it in a new place though. I will gather with girlfriends for our annual Christmas Tea.  We are planning a secret Santa where we will make a gift rather than buy one. My sister is readying her house to have us join her Christmas Day.