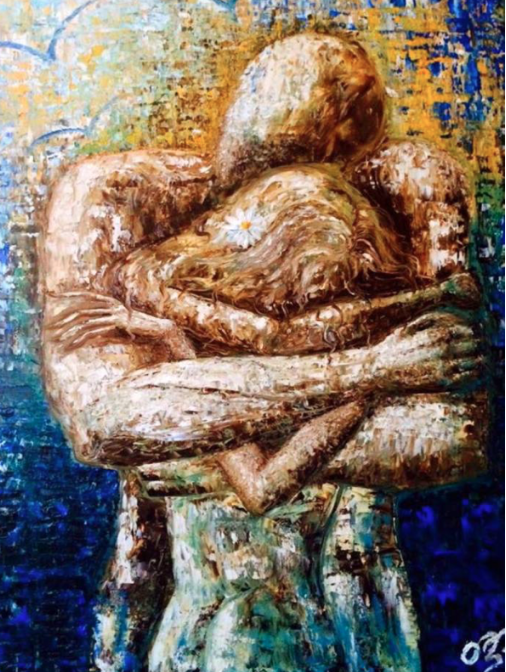 Not too long after my husband’s passing it crossed my mind that at some point in the future I might consider being with a new man, not a man that could ever replace my husband, but a man I could spend time with.  A man who would make me laugh.  A man to share meals with, adventures with, and maybe the next years of my life with.

When I reached the one-year anniversary of my husband’s passing, I sank into a deep wave of grief. I was struck by the terrible twin facts that somehow, I had survived a year without my husband, and that it was already a year since he’d been gone.  And with the one-year mark came all the assumptions and expectations about where I was supposed to be in this grieving process.  The bottom line seemed to be I should be getting over it by now. Moving on.

But that isn’t at all how I felt.  In fact, it felt much worse as the reality sank in, yet again, that I would live the rest of my life without him.

So, in that time of need, of choking on the sorrow, I reached out to an old friend from the past.

Truth be told, we’d been more than friends.  He was my first love in college.  It had been a rollercoaster of a relationship, and we’d lived together for a few years before we parted ways, rather acrimoniously.  I’d married Mike and he’d gone on to start a family of his own many miles away from California.

But life has a way of changing us, molding us, at times chewing us up and spitting us out, as we continue to evolve into the beings we are.

It was so good to hear his voice. I could barely get the words out on the phone, about how much it hurt, how I didn’t know what to do with the emotions roiling inside of me. Not everything I felt was grief, but there were also dark feelings of anger, and fear, and loneliness, and the sense that I was standing at the edge of the abyss and falling, falling.

Maybe one of the reasons I’d reached out to this friend from long ago, was that he too, had struggled with his own dark demons, heard my anguish and was not afraid of it.  Did not look to change the subject or pretend it was anything other than awful to experience.  In him, I believed there was someone who could hold the net for me, would not let me drown.  With his voice as the anchor across the miles, I could weep, and attempt to share, with the limitation of words, what the hell I was feeling.

After a while, the ache eased, the tears slowed, and I was able to ask him about his life, what had been going on after all these years.  He made me smile, then wrung a small laugh out of me. As I blew my nose and got ready to let him go, he asked the question, “Do you want me to come out? To be with you?”

Oh yes!  Yes, please.  Come.  How soon can you be here? I need you.  I need the refuge of your arms around me, to ease this grief I can’t escape from. Yes, please come.”  I don’t think I said all of that aloud, though it was certainly what I thought. 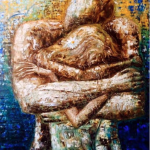 Just a week later we met half way between us, in Colorado. It was a two-hour flight, and then I’d booked a hotel in Denver.  What a riot of emotions and sensations to see him again after all those years.  I’d gotten over the first shock when I’d heard his voice on the phone, but now to see him in person was another adjustment. He’d changed, of course.  And yet many things had not.  His bright blue eyes still twinkled, his sly grin.  His hands were the same as he took my bag, and my senses recognized his scent. And as I came off the plane, stumbling around to find him, his arms found me, wrapped around me, and held me tight, a lifeline.

Ah, but it’s not quite that simple, is it?  This grief, this transition.  In the split second when I said yes to meeting him, and felt relief, I also felt the guilt.  I knew, based on our history, our chemistry, that I was saying yes to more than a cup of coffee and a Danish.  The question was, could I hold both in my hands, my heart:  the deep grief and heartbreak of losing my husband on one hand, and this sharing of my soul, potentially my body, with someone different, on the other?

It had been a year after all.  I did not think my husband would begrudge me comfort, relief, or even a new love when the time was right.  If anything, he would want nothing but my joy and happiness.  But still I wrestled with the guilt.  Had I waited long enough? Did it mean I loved him any less?

The encounter in Colorado was strange, surreal, filled with heartache and tears, laughter and release.  There was the great gift of being able to sob into a pillow and have a warm hand stroke my back. It felt wonderful to be touched, held, kissed.  For a time, there was the relief of simply existing in the present moment of physical sensation, of forgetting the everything else that hurt.

As I think back over those few days together, I am struck by certain things, odd moments that stood out, jolted me, as I superimposed this new coming together against all I had lost.

There are those times when you walk down a path and think you know where you are going, except it is not at all the path you thought you were on.  Suddenly you stumble, disoriented, it’s something out of a dream, a nightmare. Your heart catches before you lurch awake and remember.  This is not the old road.  This is a new road.  Yet, even though it is a road you do not know, the disorientation slowly eases, the double vision blends back into one, and you begin to move forward once again.

I have seen him a few times since then, this new / yet familiar man, and there are still those jolts of past and present, coffee brought to bed, cooking a meal, a hike in the woods.  But with each visit, it becomes less jarring, new memories, different memories, are being laid down.  It is no longer so much a comparison.

Of course, given the familiarity of our past it is easy to want to jump to a destination, to consider that we are heading somewhere.  As I share bits of this journey with friends, I seek to label “us,” as something recognizable.

Yet, he lives far away, and each of us, for different reasons, is not likely to relocate any time soon, so I have no idea how this relationship will evolve.  But as a friend told me recently, there are many ways to be in relationship, life is fluid that way.  It does not have to be the picket fence and the wedding ring, or even a traditional monogamous scenario.  Anything is possible.

Life is fluid. I like that, it is a comforting thought.  It means I don’t have to figure it all out.  It gives me, us, permission, freedom, to find our own way.

For the moment, in this moment (for in truth that is all that we have), he is friend, lover, keeper of my secrets.  He is not afraid of my storms, my darkness, my tears. I do not have to pretend.  He supports my creativity, listens to my rants, makes me laugh, and reminds me that I am a woman, passionate and alive, with a life yet to live.

Over time, there are longer and longer periods when it is no longer about grieving and letting go of the past, but rather it is about looking forward, towards this new life unfolding.

Not the end of the road, but rather, the beginning.